The authors of Emotional Logic: Harnessing your emotions into inner strength have been married for nearly forty years. Marian still practices medicine under her maiden name of Langsford. They both now teach internationally the Emotional Logic method of preventing stress-related mental and physical illnesses, which Trevor developed while in medical practice. The best compliment they have received, they say, was from a medical student in Bulawayo, Zimbabwe, who stood up after a training session and said, “I have learnt today that it is really cool to be old, and married, and still together, ‘cos you get to travel the world and inspire people like us!” We don’t look very old; we received that as the honour it was intended to convey in that culture.

Learning to activate your inbuilt Emotional Logic helps to build more responsive relationships in any new situations you face. And it can be learnt at any age. An active schools programme in the UK has a wide range of age-appropriate materials, such that a five-year-old boy took an emotion leaf from a ‘Talking Together Tree’ they had made in the classroom, and took it to the teacher saying, “I would like to tell the class why I am feeling angry about something.” Imagine the difference that ability to talk sensibly about emotions rather than only act them out, or regulate them, might have. 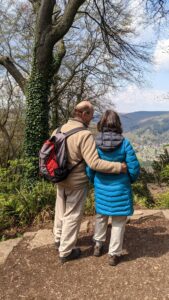 In Chapter 1, Trevor comments on Marian’s story about a misunderstanding with a friend who had offered to help tidy her garden one autumn. She had told how understanding the emotional logic of her many loss reactions that followed helped to avoid a break-up. Here is an extract from Trevor:

As the eldest daughter in a Devon farming family, Marian grew up on a mixed dairy and horticulture farm overlooking rolling hills, surrounded by buckets of early flowers that needed bunching each evening for market the next day. They were not rich. She loved it. She has a wisdom from nature that I had missed, having been brought up in the London suburbs. For example, she once said, “Gardening isn’t all about pulling up weeds. You have to plant something in the earth in its place, and care for it.” A comment like that can leave me fixed into a garden chair for ages while I watch her getting her hands covered in earth and planting. Something simple like this can lead me to a lot of thinking, which I consider is my core skill.

So, what do I think about? I think a lot about human nature. I think things like, ‘Seemingly small things that break out on the surface of people’s lives can have deeper roots than we realise at first.’ It took me a few decades to realise that it did me a lot of good to listen to Marian. I think many men discover the same at some point in their married lives…

Emotional Logic was born out of years of experience in general medical practice, and out of a disrupted family background that Trevor experienced as traumatising. With a depth of emotional memories to draw upon, Emotional Logic harnesses the language of emotions into the inner strength needed to come through times of trouble stronger and healthier. Post-traumatic growth is encouraged as a way forward from post-traumatic stress. As a senior Community Psychiatric Nurse who uses Emotional Logic in her work said, “Emotional Logic heals the broken heart behind mental illness.”

Once learnt, people can share their new trauma-responsive conversational skills in their daily encounters with others. This prevents isolation following hurts. It reduces the risk of illness by building greater resilience and a realistic hope for recovery into relationships. Even if setbacks and disappointments occur, knowing how to activate one’s inbuilt Emotional Logic provides a world of constructive options to talk about. And where is there better to talk and to explore new ways forward than in nature, where the seeds of something beautiful in life can take root and grow.