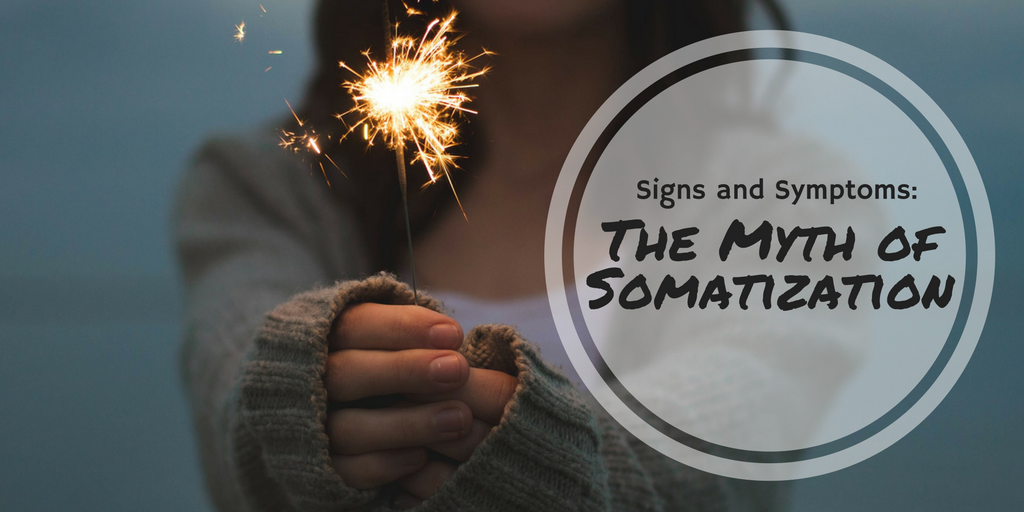 During any consultation, the patient and practitioner seek to bridge a gulf of subjective meaning. The events the patient notices and tries to describe are ‘symptoms’; the doctor, meanwhile, is also looking for ‘signs’—usually described as ‘objective indications’ of disease or disorder. In some cases, the disease is readily identifiable (say, jaundice) because the signs are evident.

However, where the practitioner favors signs to the exclusion of symptoms, problems can arise. In the absence of readily observable signs, due diligence and medico-legal concerns usually mean that the patient will be referred on to one or more specialists for further consultations and tests. Where no pathology is identified, the patient is at risk of being stigmatized as ‘somatizing’, suffering from ‘psychosomatic’, ‘somatoform’ or ‘conversion’ disorder, ‘functional illness’, or ‘hypochondriasis’.

None of these nominalized terms is particularly helpful, because none of them provides insight into the problem. Moreover, they tend to exclude the patient’s experience, the context within which his problem arises. Patients are quick to detect the underlying suggestion that what is ailing them is ‘all in the mind’. If they do not medicate the patient, many doctors are quick to outsource the problem to psychologists, psychiatrists, or counselors (where available), reinforcing the picture of troublesome neurotics wasting the medical profession’s valuable time.

Medical NLP regards ‘somatization’, with its overtones of neuroticism, as a fiction. Not only do imbalances within the body–mind system express themselves somatically, both as some kind of physical felt sense and in changes in cellular function or structure, but we cannot have any experience without some physical movement or manifestation.

As ‘open adaptive systems’, we humans are constantly processing billions of bits of data, both exteroceptive (from outside the body) and enteroceptive (from within), most of which are filtered out of our conscious awareness. When these processes pass a certain threshold, they come into the subject’s awareness as somatic events, which are then subjected to descriptions, inferences, and evaluations, by both the ‘experts’ reviewing the condition and the patient suffering from its effects.

Diagnosis is not the disease

However, we should not confuse the descriptions and inferences we use as convenient forms of classification with the event itself. The diagnosis is not the disease. The symptom is not the problem. The problem is the problem, and the symptom is the signal that the problem has not yet been recognized and resolved.

For more insight into bridging the gap between patient and practitioner using Medical NLP visit The Society of Medical NLP website and read Garner Thomson’s Magic in Practice: The Art and Science of Language in Healing and Health available as ebook and paperback. 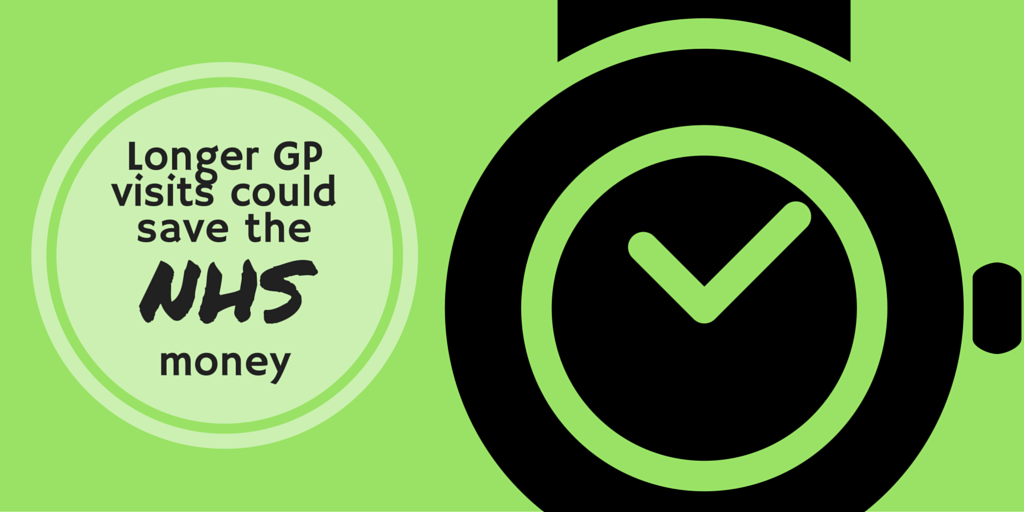 Both the British Medical Association and Glasgow researchers have reinforced the Society of Medical NLP’s claims that longer sessions for patients visiting a GP will save the NHS money.

In Magic in Practice (London:Hammersmith), the authors, Garner Thomson and Khalid Khan, point out that patients who were allowed to express their “uninterrupted story” to a doctor who was trained to address the context of the complaint as well as the content would dramatically reduce the number of visits required to resolve the issue.

Four GP practices in Glasgow offered  patients with complex chronic conditions (of the kind specifically addressed by Medical NLP) consultations lasting 30 minutes or more. Not only was the condition diagnosed, but personal problems were dealt with and care plan devised and suitable goals negotiated with the patient – similar to the “Ko Mei” format of Medical NLP.

The result was a measurable drop in “negative wellbeing” and a significant increase in quality of life.

The results are published here in the journal BMC Medicine.

The BMA has also called for the rigid 10-minute timetables to be replaced with a more a flexible system enabling doctors to spend more time with patients with more complex needs.

To learn more about Medical NLP read Magic In Practice: Introducing Medical NLP by Garner Thomson with Dr Khalid Khan, and let us know what you think about saving the NHS @HHealthBooks on twitter. 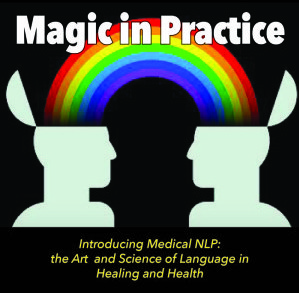 Alcohol use and abuse have been the focus of considerable media attention over recent weeks through the promotion of campaigns such as “Dry January”. Riding on the back of this comes a television documentary entitled ‘My name is….I’m an alcoholic’ which airs on Channel 5 this week. Filmed in a “talking-heads” style, it captures the stories of eight British professionals and their relationship with alcohol. Medical NLP Master Practitioner and GP Dr Lizzie Croton was one of the professionals who featured in the programme. She now volunteers for a charity which advises doctors concerned about their use of drugs and alcohol.

“It was a very straightforward decision for me when I was asked to take part,” she says. “I wanted to offer hope to fellow health professionals and show them that it is possible to stop drinking and recover. I work successfully as a GP now and I participate fully in life.”

She adds, “Despite the programme’s title, I don’t actually define myself as an alcoholic. I believe I was someone who lacked choices and needed to raise the bar on my ability to work with stress. Medical NLP has been such a huge part of me recovering from this. In short, I learnt how to reintegrate the body and mind so that they function effectively. It’s been such an incredible journey.”

Support for doctors, dentists and other medical professionals who are concerned about their use of drugs and alcohol is available from the Sick Doctors Trust.

More information on Medical NLP can be found in the book, Magic in Practice – Introducing Medical NLP, the Art and Science of Language in Healing and Health, by Garner Thomson with Dr Khalid Khan (London:Hammersmith Press), or by visiting the website www.magicinpractice.com.

The enforced closeness of the holiday season can have an all-too-familiar downside. Some of the most wrenching fall-outs among nearest and dearest tend to occur over Christmas and the New Year.

But, before you think about escaping the mandatory get-togethers and making yourself permanently unavailable to family and friends, think about this – they may just be keeping you alive.

This is the opinion of the authors of a paradigm-shifting new book on the importance of closeness and communication to human health and wellbeing. According to Garner Thomson and Khalid Khan, authors of Magic in Practice – Introducing Medical NLP, the Art and Science of Language in Healing and Health, a strong connection with both family and friends is a better predictor of health and longevity than doing all the ‘right’ things, such as quitting smoking, eating your five a day, and getting plenty of sleep.

They point to a landmark study, started in the 1940s, and still the subject of intensive research.

Scientists were intrigued by strikingly low rates of myocardial infarction reported from the little Pennsylvanian town of Roseto, where they expected to find a fit, tobacco- and alcohol-free community enjoying all the benefits of clean-living. When they arrived, they found as many smokers, drinkers and couch potatoes as in the rest of the country, where heart disease was on the rise.

The difference between Roseto and other similar towns, the researchers discovered, was a particularly cohesive social structure.

“The inhabitants of the little town were unique in the experience of the scientists who were drawn there,” says Garner Thomson. “They could be described as ‘barn-raisers’ – which is to say if someone’s barn burned down, everybody in the town turned out to rebuild it. Somehow, the closeness Rosetans enjoyed inoculated them against cardiac and other problems

“Clearly this premise had to be tested – and time was the only true test. The scientists reasoned that if the society changed, became less cohesive and more like its neighbouring towns and cities, the effect would eventually disappear.

“Sadly, as the community became steadily more ‘Americanised’, this proved to be true.”

The 50-year longitudinal study, published in 1992, categorically established that social support and connectedness had provided a powerfully salutogenic (health-promoting) effect on the heart.[1]

Nor was this a random fluctuation affecting a small, isolated community, the authors say.

A number of studies have since confirmed that host resistance to a wide range of illnesses is affected by the social context in which you live and the support you feel you receive. A recent study of 2,264 women diagnosed with breast cancer concluded that those without strong social bonds were up to 61% more likely to die within three years of diagnosis.

According to Dr Candyce Kroenke, lead researcher at the Kaiser Permanente Research Centre, California, the risk of death equals well-established risk factors, including smoking and alcohol consumption, and exceeds the influence of other risk factors such as physical inactivity and obesity.[2]

At least two major studies have suggested that loneliness can double the risk of elderly people developing Alzheimer-like diseases.

“What is particularly interesting about these studies is the suggestion that it is feelings of loneliness, rather than social isolation itself, that may cause the corrosive effects of dementia and other problems,” Thomson says. [3],[4]

Key factors in social integration have been identified as having someone to confide in, help with financial issues and offer practical support, such as baby-sitting, when you need it, and with whom you can discuss problems and share solutions.[5] “These are what we call ‘3 am friends,” says Thomson, “people we can call for support at any hour, no matter how early, and know they will always have time for us.”

So, before you decide to celebrate the holiday season away from Aunty Elsie and Uncle Edward, think very carefully about the possible consequences. Some of the other established benefits of social support and connectedness include: extended lifespan (double that of people with low social ties)[6]; improved recovery from heart attack (three times better for those with high social ties)[7]; reduced progression from HIV to Aids [8] and, even protection from the common cold.[9]

Magic in Practice – Introducing Medical NLP, the Art and Science of Language in Healing and Health is available as paperback or eBook from £6.99. Enter coupon code Xmas15 at checkout for a 15% discount on your basket.