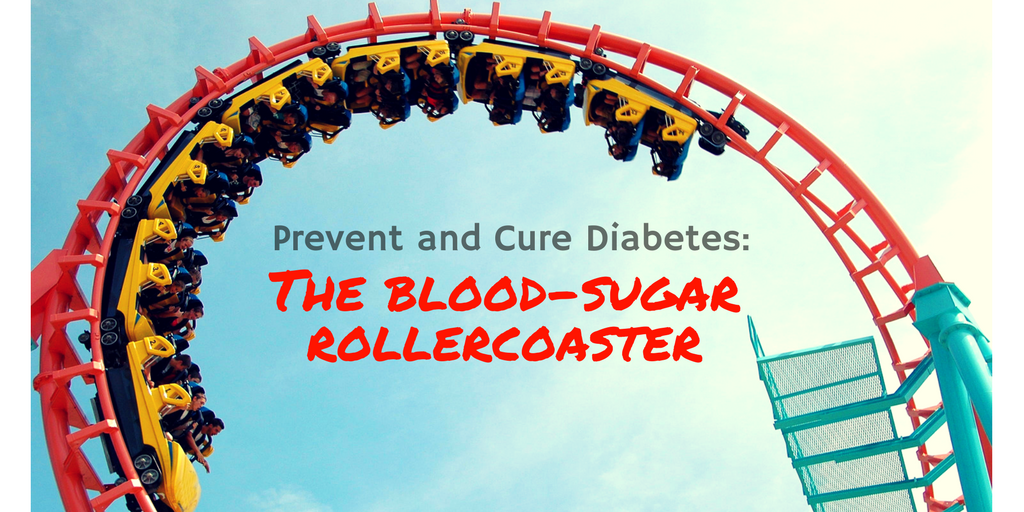 Sugar is extremely damaging to the body for many reasons. It is damaging to the body in high levels, it is damaging to the body in low levels, and the swinging of levels between the two is additionally damaging because of the hormonal response to those rapid changes. I call this the blood-sugar rollercoaster – it is often described as a ‘hypoglycaemic tendency’ (‘hypo’ meaning ‘below’, from the Greek) – but it is the whole rollercoaster that causes metabolic havoc – not just the dips. If we constantly eat carbohydrate foods, this is a rollercoaster which just keeps on going, and along with the metabolic havoc, there are associated mood swings which mirror the ride. These emotions are very similar to those documented by Barry Ritholtz, in his financial writings on the rollercoaster ride experienced by investors in risky stocks. People who are regularly feeling these emotions, and in particular are experiencing them cyclically, are most likely already on the blood-sugar rollercoaster: Returning to the medical case in point, in metabolic syndrome and diabetes any or all of the following problems can result. In each case, a description of the problem is followed by symptoms and diseases that may result from that problem, thereby giving clues as to whether this may be an issue in a particular individual. 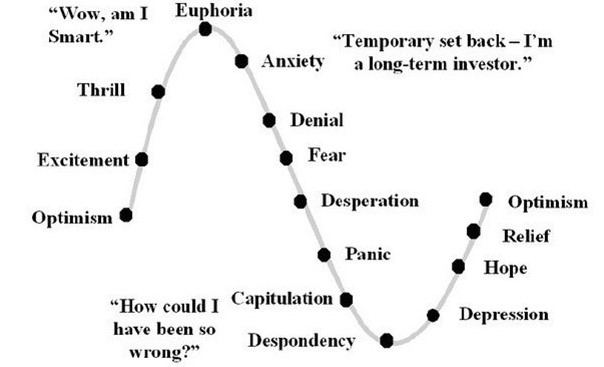 The blood-sugar rollercoaster, as I explained earlier, is my name for the process of rapidly rising levels of blood sugar prompting a release of insulin and the ‘happy’ brain neurotransmitters followed by rapidly falling levels of blood sugar causing a release of adrenaline. This combined effect switches on addiction. Wobbly blood sugar levels are highly damaging because of their hormonal effects. These hormonal effects I suspect relate to the rate at which levels of sugar rise and fall in the bloodstream. As we lose control of our blood sugar, then eating a high-carbohydrate snack or meal will cause blood sugar levels to spike, and as blood sugar levels make this rapid rise there is an outpouring of insulin in order to protect the body from this dangerous (but addictive) sugar spike. Insulin brings the blood sugar level down by shunting it into fat. However, if this occurs quickly, then blood sugar levels fall precipitously and that results in an outpouring of adrenaline. Adrenaline is responsible for all the symptoms that we call ‘hypoglycaemia’.

However, the term hypoglycaemia I suspect is a misnomer that relates to at least two issues. Firstly, adrenaline is released in response to poor fuel delivery (lack of sugar and/or ketones in the bloodstream). This means that, in the keto-adapted, the adrenaline symptoms do not arise because these people can switch into fat burning mode. Secondly, in those who cannot make this switch, it is not just the absolute level of blood sugar that causes the symptoms but also the rate of change; this means that often people who complain of hypoglycaemia wil d their blood sugar level is normal from a ‘snapshot’ blood-sugar test result. What they need is a ‘video’ of their blood sugar level changing over time to make the diagnosis. Consequences of the rollercoaster spikes in insulin and adrenaline include the following:

a.) High levels of insulin put us into a metabolic state of laying down fat, and prevent fat burning – this is the major problem of
metabolic inflexibility. It is almost impossible to lose weight when insulin levels are high. Furthermore this effect can be sustained for hours.

b.) High levels of adrenaline make us anxious, irritable and sleepless. This adrenaline release is a major cause of high blood pressure. Indeed, it astonishes me that doctors appear completely unaware of this link so that hypertension is described as ‘essential’ (of unknown cause) or ‘idiopathic’ (again, of unknown cause). They may accurately describe it as due to ‘stress’, but fail to realise the cause of this stress is actually nutritional stress due to loss of control of blood sugar levels.

Sugar has immediate effects on the brain, by various mechanisms, and this is partly responsible for why sugar is so addictive. For people who have lost control of their blood sugar, in the very short term, a carbohydrate rush, or ‘hit’, will have a calming effect which allows them to concentrate. Inspector Morse used the carbohydrate hit of a pint of beer to solve his murder mysteries – but ended up diabetic and died prematurely. Falstaff too found that alcohol had an inspirational effect.

‘It ascends me into the brain, dries me there all the foolish and dull and crudy vapours which environ it, makes it apprehensive, quick, forgetive, full of nimble, fiery, and delectable shapes, which delivered o’er to the voice, the tongue, which is the birth, becomes excellent wit.’  Act IV scene iii of Henry IV, Part 2 William Shakespeare (1564–1616)

Any parent will report how their child’s behaviour changes abruptly with a sugar hit and, much more noticeably, when blood sugar dives and they become irritable and moody. My daughters were often tired and irritable when they came in from school – it was not until supper that their normal good humour and energy were restored.

Problems with sugar – the rollercoaster

You will again see the similarities between the mood changes here and those noted by Barry Ritholtz in his financial writings on the rollercoaster ride experienced by investors in risky stocks.

This extract was taken from Prevent and Cure Diabetes: Delicious Diets, Not Dangerous Drugs by Dr Sarah Myhill.