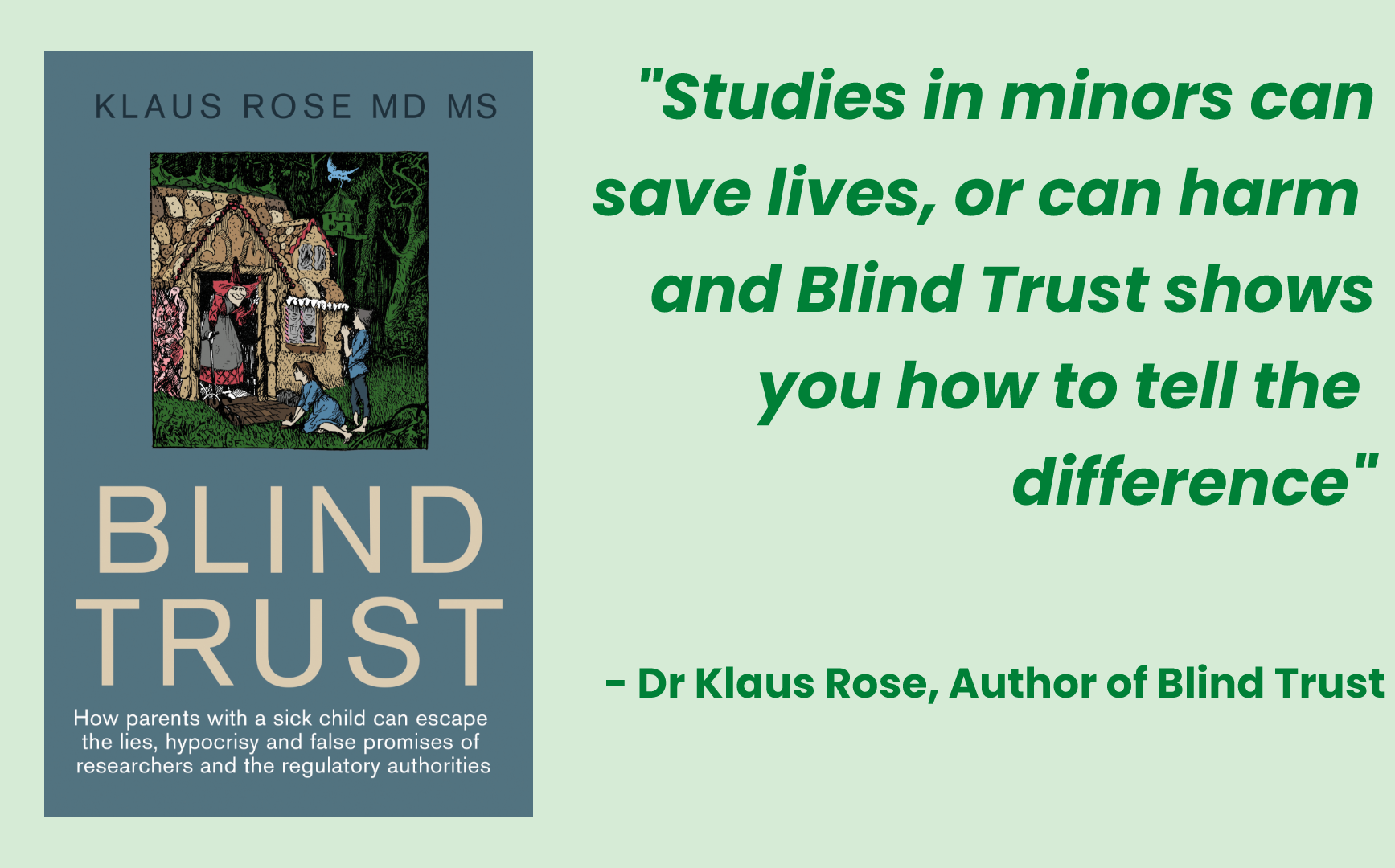 My new book, Blind Trust, deals with a topic that many in the health and pharmaceutical world would prefer to ignore and many journalists have proved nervous about covering. Which is why I would like to reach out directly with this blog post and tell you a bit about it and why so many find this topic uncomfortable. If you have a sick child, if you raise money for a paediatric charity or for paediatric research, if you are a doctor seeing child, and especially adolescent, patients, you need to know what is in my book. 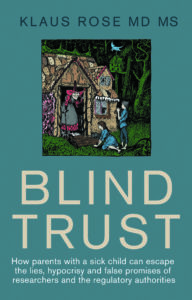 The picture on the cover is an old illustration of the fairy story, Hansel and Gretel. These children, abandoned in the forest and starving – a metaphor in my book for being desperately ill – come across a house made of ginger bread and other treats and can’t resist eating it; the temptation is too great. The owner of the house is an old woman who seems friendly and welcoming (she represents the authorities running and sanctioning unnecessary research to boost their careers), but we, familiar with the story, know her sugary house is to tempt children in so she can exploit them. Just as you know the story of Hansel and Gretel, I would like you to know the many stories in Blind Trust so that you can be on your guard in these situations too.

The background is laudable enough. Clinical studies evolved with modern drug development. When penicillin was first produced industrially, during World War II, complicated studies were unnecessary as the benefits were so clear – patients with bacterial infections were literally snatched from their deathbeds by this new drug. The development of new pharmaceuticals then accelerated, and the range of treatable  conditions expanded to include pain, insomnia, diabetes, birth control and much more. At this time, a German company developed and marketed a drug whose name is probably familiar – thalidomide – for all sorts of ailments but including insomnia, nervousness and nausea in pregnancy. In the late 1950s, it was discovered that it had caused thousands of severe birth defects worldwide. This became a turning point in drug development. From 1962 on, US law demanded studies for all new drugs.

Separately, back in the 1950s, toxicities had been reported in babies, and especially premature babies, treated with antibiotics. To avoid lawsuits for damages in the litigious US, pharmaceutical companies began including ‘pediatric warnings’ with information about their products. This, in turn, led to the idea that all children were ‘therapeutic orphans’ though they were being successfully treated for an increasing range of problems, including many cancers.

Legitimate concerns for babies became the narrative that all drugs were dangerous in all children if not tested separately, based on the concept that ‘children are not small adults’. This mantra invaded medicine, science and politics. Confidence in science was high. US lawmakers decided to reward pediatric pharmaceutical studies by extending drug patents. Companies could sell drugs longer at a higher price if they funded research. And here the big challenge began.

No need to be a doctor to know that 15-year-old teenagers who are bigger and stronger than mom or dad are physically mature. No need to be a shrink to know that emotional and mental development usually lags behind. The FDA defined ‘children’ first as being below 17; today the cut off is below 18 years. But drugs treat the body, not the legal status. ‘Pediatric’ studies in minors, including physically mature adolescents, became big business for researchers. All scientists complain about a lack of funds. For ‘pediatric’ research, a bonanza started. It became worse when the European Union (EU) expanded the obligation for ‘pediatric’ studies in Europe. Yet many of these studies were futile in adolescents and massively exaggerated in young children. Minors don’t remain as vulnerable as newborns until they come of age. Today, thousands of questionable ‘pediatric’ studies are being performed worldwide with the young people participating, and their parents, sadly assuming they are contributing both to their own chances of recovery and to the future health of others. The reality is, many may be receiving placebo treatments to satisfy the regulatory authorities when it is already clear what active treatments are safe and effective.

The opinion that most pharmaceutical studies in children and young people are excessive is not shared by most medical and  pharmaceutical professionals worldwide. In fact, I am one of very few. But I know what I am talking about. I am a medical doctor and was global head of pediatric drug development at two large international pharma companies. I am independent now, and can publish papers and write books about this challenge. In this position I can say categorically that the definition of children as under 18 is a legal, not a medical one. There are no drugs that work in adults but not in children. Kids are not another species. The focus of research in children who are not physically mature should be dosage and safety, not efficacy that is already known. A further issue is drug toxicity in babies. Dosage studies and safety observations are much less demanding, expensive and testing for participants than complex international ‘pediatric’ studies that repeat in young people before their 18th birthday what we already know to be the case after they turn 18.  Studies in minors can save lives, or can harm. Blind Trust shows you how to tell the difference. I also offer online seminars for pharmaceutical companies in which I explain how to push back against potentially harmful studies demanded by the FDA and the European Medicines Agency (EMA) so that research funding can be focused where it will genuinely make a difference.

To  read the first chapter of Blind Trust for free, click here.