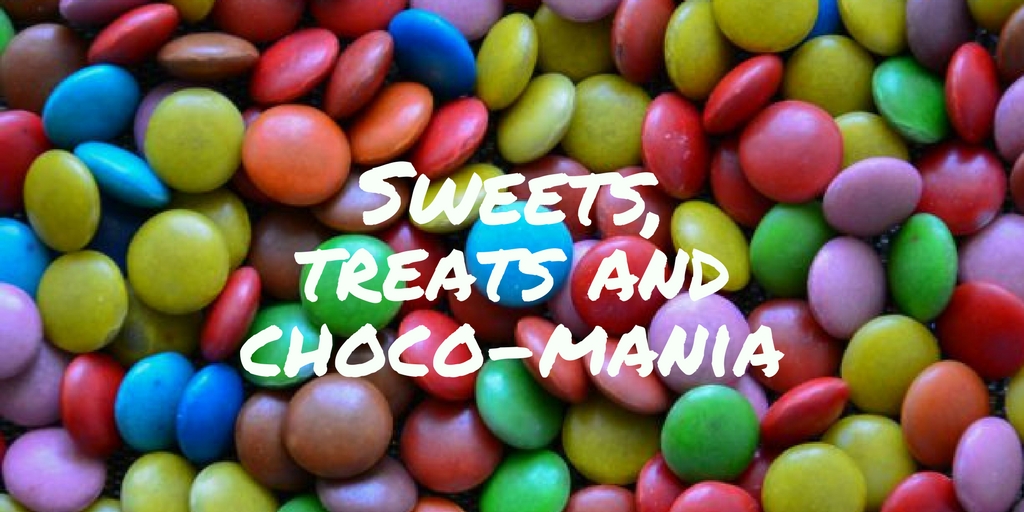 Just because you have diabetes doesn’t mean you have to go without sweets and desserts. My experience is that sweets, chocolate, ice cream and other treats can be included in a healthy diet that still allows you to keep your blood glucose under control. For instance, when I went on holiday to Cornwall at Easter, I was able to have an ice cream in Padstow because I was about to cycle back along the Camel Trail. And, at my friend’s birthday party, I was allowed a slice of birthday cake because I had an extra unit of insulin to deal with it. And, every so often, a cake or choc ice after dinner is not a problem at all.

Everyone knows that sweets aren’t the healthiest thing ever; it would be much easier if we all craved broccoli and Brussels sprouts rather than choccies and sugar-coated E-numbers. Sweets may be a totally delicious treat, but they’re full of sugar. And – for everyone, not just people with diabetes – too much sugar is bad.

So, how do you eat sweets and treats and avoid hypers? It’s simple. Try to save sweets for after lunch or dinner, because this way the starch in your other food slows down the sugar in the sweets, and the effect on your blood glucose is much less. Also, think about the types of sweets you eat. Chewing gum and chocolate are far better for your blood sugar than sherbet or lollipops. This is because the sugar in chewing gum is released from the gum slowly (that’s how it keeps its flavour) and the fat in chocolate slows down the emptying of the stomach so that the sugar gets into your system more gradually; whereas sherbet and lollipops are both virtually pure sugar, which doesn’t have to be broken down or refined once inside the body, so it can get into the bloodstream straight away. Another way to enjoy sweets and chocolates is by eating them whilst you are playing sport, doing other exercise or taking part in a P.E. lesson.

So being diabetic doesn’t mean you can’t have sweets or desserts, but you do have to think about their effect on your blood sugar, and there are instances where eating sweets would just be out of the question (for instance if you are hyper). It can be really annoying, and as ridiculous as it sounds, it can become a kind of psychological barrier. I’ve experienced this myself.

A couple of months after I was diagnosed, I was starting to become used to the idea that I had a condition that would not go away. It was hard to get it into my head, though, that I’d have to have injections every day just to stay alive. I used to get upset almost every time I did my Lantus (glargine), then get angry with myself for being so miserable, and try to justify my anger by thinking up all the things I hated about diabetes: I had to stick needles in myself every mealtime, which hurt; I was always going hypo or hyper and it made me feel ill; I was constantly having to worry about my blood sugar and I could never just go and help myself to sweets or chocolate.
I told Mom about the way that I felt so angry a lot of the time. “Think about it,” she said, “What are you actually missing out on? Is there actually anything you used to do that you can’t do any more?”

There was only one thing I could think of: I couldn’t just have sweets whenever I felt like it. I picked up on this and felt really annoyed about it. It may seem like a really sad thing if you’ve never experienced this yourself, but I became practically obsessed with chocolate.

Dad tried to rationalise it by pointing out that I wouldn’t be allowed to just go and help myself to sweets whenever I wanted to anyway. It didn’t make a bit of difference, though. The thing is, I wouldn’t be allowed, but I could have. Now not only would I get in to trouble for gorging on sweets, but it would actually make me ill. And there was no point in arguing that I’d still feel sick after eating loads of chocolate anyway – I may have felt sick but I wouldn’t have actually been medically ill. Now I would be.

I decided that this was the thing that diabetes actually stopped me from doing and quickly became fixated on sweets and chocolate; I used to feel depressed if I missed a P.E. lesson and therefore couldn’t have my chocolate exercise snack, and I used to get what I can only call cravings for sweets. Chocolate, chewing gum, mints, ice cream, even dextrose tablets; as long as I had something sugary to eat I’d be okay. But when I couldn’t have anything sweet I’d get annoyed or upset, and feel like I simply had to have something. I turned to sugar-free gum. I bought massive multipacks of the stuff with my pocket money and often had three or four packs on the go at one time. At my worst point, I was chomping through four pieces of gum daily – and that was on a good day.

The gum worked well, but although I always tried to make sure I was stocked up, I sometimes ran out. I usually managed okay for the day or so until I could go to the shops and buy some more, but sometimes I ended up sneaking an extra exercise snack in P.E., or serving myself slightly more ice cream with dinner than I was supposed to have.

Once, I had had a really boring day at school and got home feeling really fed up. I wanted some chocolate – but I knew that I wasn’t supposed to have any between meals. I wanted it anyway, so I tiptoed into the kitchen and took a bag of mini chocolate eggs, rummaged around the bag to find one that had broken in half so that I could just have part of it and not go hyper; then I ate it.

I wanted more. I tipped a few chocolate eggs out into my hand and ate them all in one go. Then, still craving more, I took another few and tried to keep them in my mouth and savour the chocolate. A minute or so later, they’d melted and dissolved. But I still wanted more.

I knew that my brother would be able to tell I’d had some of his sweets if I took any more, so instead I took the packet of dextrose from my blazer pocket and ate a couple of the tablets. I suddenly realised I was going to go really hyper if I didn’t have any extra insulin.

So I found my insulin and injected another half unit. But while I was holding the needle in my stomach I remembered that too much insulin would make me go low, too – and I had no idea how much insulin I needed for what I’d just had because I couldn’t remember how much I’d eaten. I pulled the needle out of my stomach before I’d counted ten seconds. Now I had no idea how much insulin had actually got into me either. I got really upset and into a real panic.
Then Mom and my brother came into the kitchen and I burst out in tears and told my Mom what I’d just done. I knew all along it wasn’t really sensible, but all that had mattered at the time had been that I wanted the chocolate.

Half an hour or so later, my blood sugar went up a bit to about 13 mmol/l, but it came down quickly, dropping to 4 mmol/l about another hour on, because of the insulin peaking. I had a snack at this point and then my blood sugar stayed okay for the rest of the day.

After this experience, I started to think that perhaps I had a mental problem or was developing a literal addiction to sugar. I felt really bad about myself and thought I seriously could be going mad. Now I know I wasn’t going mad – I’m sure other people are like this when they feel like they’re not allowed sweets any more…

Unfortunately, there’s no substitute for willpower. The thing that made me stop chewing so much gum was when I was sorting out my bag ready to go on holiday and found that I had (I’m not joking) about six packs of gum on the go. In the cupboard I found a brand new pack that I’d just bought, and I realised just how much I was getting through. I’d also spent most of my pocket money for the last few weeks on chewing gum. I decided it was getting ridiculous and made a pact with myself that I would take one pack, and one pack only, on holiday. I wouldn’t buy any more while I was away, and if I still had some left by the last day, I could keep the rest that I‘d left at home. If I didn’t manage it, I thought, it could possibly mean that I was actually addicted to chewing gum, in which case I would throw away every last piece of gum in the house and never buy any again. I would have to stop the habit.

I did actually manage it. However, when I got back, I’d pretty much stopped feeling like I had to have gum or sweets. I finished off what I had left – but this time it lasted much longer. Since then, I have continued to buy gum, but only occasionally – and because I want to, not because I feel I need it.

If you crave sweets…

This blog is an extract taken from Fibi Ward’s book, No Added Sugar – A chatty but practical guide to coping with a diagnosis of type 1 diabetes in your teens, by a teenager, for teenagers