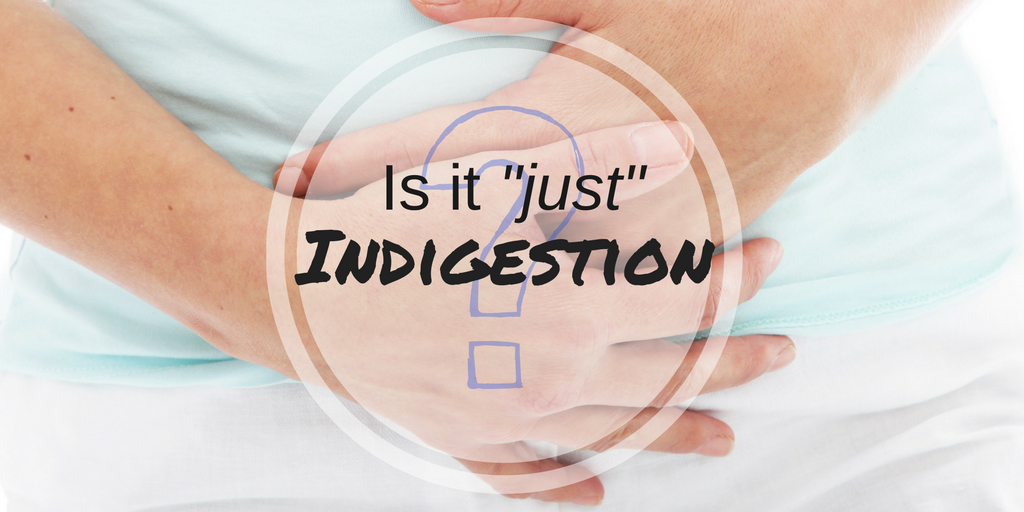 Indigestion is that uncomfortable feeling most of us have experienced at some point in the upper abdomen or lower part of the chest – usually after eating or drinking (but not always). The official medical definition is upper abdominal discomfort or pain that may be described as a burning sensation, heaviness or an ache. It is often related to eating and may be accompanied by other symptoms, such as nausea, fullness in the upper abdomen or belching. It’s usually worse if you lie down directly after eating a heavy meal.

Other names for indigestion include dyspepsia and acid reflux or heartburn. It is basically an inflammation of the gullet (oesophagus) – the long pipe that runs from the mouth to the stomach. Indigestion is so common most people will have experienced it at some time and it’s usually more of a fleeting inconvenience than a major health problem. Most people don’t see their doctor about it and either grin and bear it or simply treat it themselves with remedies they can buy over the counter from a chemist. Only a quarter of people who suffer indigestion see their GP about their symptoms and about 10 per cent of these consultations will be referred for further investigations.

Indigestion is rarely a symptom of a serious underlying medical condition (but if you are worried check out our list of reasons for an urgent referral, below). In people who have an endoscopy to investigate their indigestion, 30 per cent will have no abnormal findings and 10 to 17 per cent will have oesophagitis (inflammation of the oesophagus) and the rest will have gastric or duodenal ulcers, gastritis, duodenitis (inflammation of the duodenum) or hiatus hernias, according to the British Society of Gastroenterology.

But, having said that, we’re not saying indigestion can’t still affect your quality of life and be a pain to deal with. If you’re one of the unfortunate ones who suffer from recurrent severe bouts of indigestion, Chapter 8 in What’s Up With Your Gut may help you get to the root of what’s causing your symptoms, help you find some long term relief and enable you to enjoy your food again.

If you have one or more of the following symptoms, you may have one of the conditions discussed in this blog.

Most people associate indigestion with overdoing it, with a big meal, sometimes with a high fat or spice content – creamy curry sauces and dishes containing chilli for instance. You might also notice that particular foods can trigger your symptoms, including curries, fatty foods, citrus fruits, bananas and cucumbers – it’s very individual though. Sometimes however, it can be down to something simple such as eating too fast or too close to bedtime. Drinking too much alcohol, or caffeine in coffee, tea and chocolate may have a similar effect.

There are many other causes of indigestion and sometimes the cause isn’t so obvious. These other causes include the side effects of drugs, including non-steroidal anti-inflammatory drugs (NSAIDs) taken to relieve the pain of arthritis (such as ibuprofen and aspirin) and nitrates prescribed for angina for instance.

A major cause of recurring indigestion is acid reflux, or gastro-oesophageal reflux disease (GORD), which is caused by the sphincter in the oesophagus failing to close and prevent

Another cause of GORD is hiatus hernia – where part of the stomach pushes up through the diaphragm (the sheet of muscle between the abdomen and the chest, needed for breathing), partially blocking refluxed stomach acid in the oesophagus. Being overweight or obese (including weight gain due to pregnancy) will make it more likely you’ll suffer from acid reflux – obesity causes more pressure in the abdomen which forces acid back up into the gullet. This is also true if you are constipated or wearing clothes with a tight waistband. Chemicals in cigarette smoke can also relax the ring of muscle that divides the stomach from the oesophagus and make it easier for stomach acid to escape back into the gullet, causing acid reflux/heartburn symptoms. Stress and anxiety are also believed to play a part in indigestion, as is increasing age.

If you have some of the ‘alarm bell’ symptoms described below you should be considered for urgent endoscopy referral rather than taking any prolonged treatments which may mask the symptoms of a more serious illness.

Reasons for an urgent referral

If you’re struggling with indigestion don’t panic, but don’t let it ruin your life. If you have any doubts at all about whether your indigestion might be something more serious, visit your doctor and tell them ALL the symptoms.

What’s Up With Your Gut is available now as paperback and ebook.