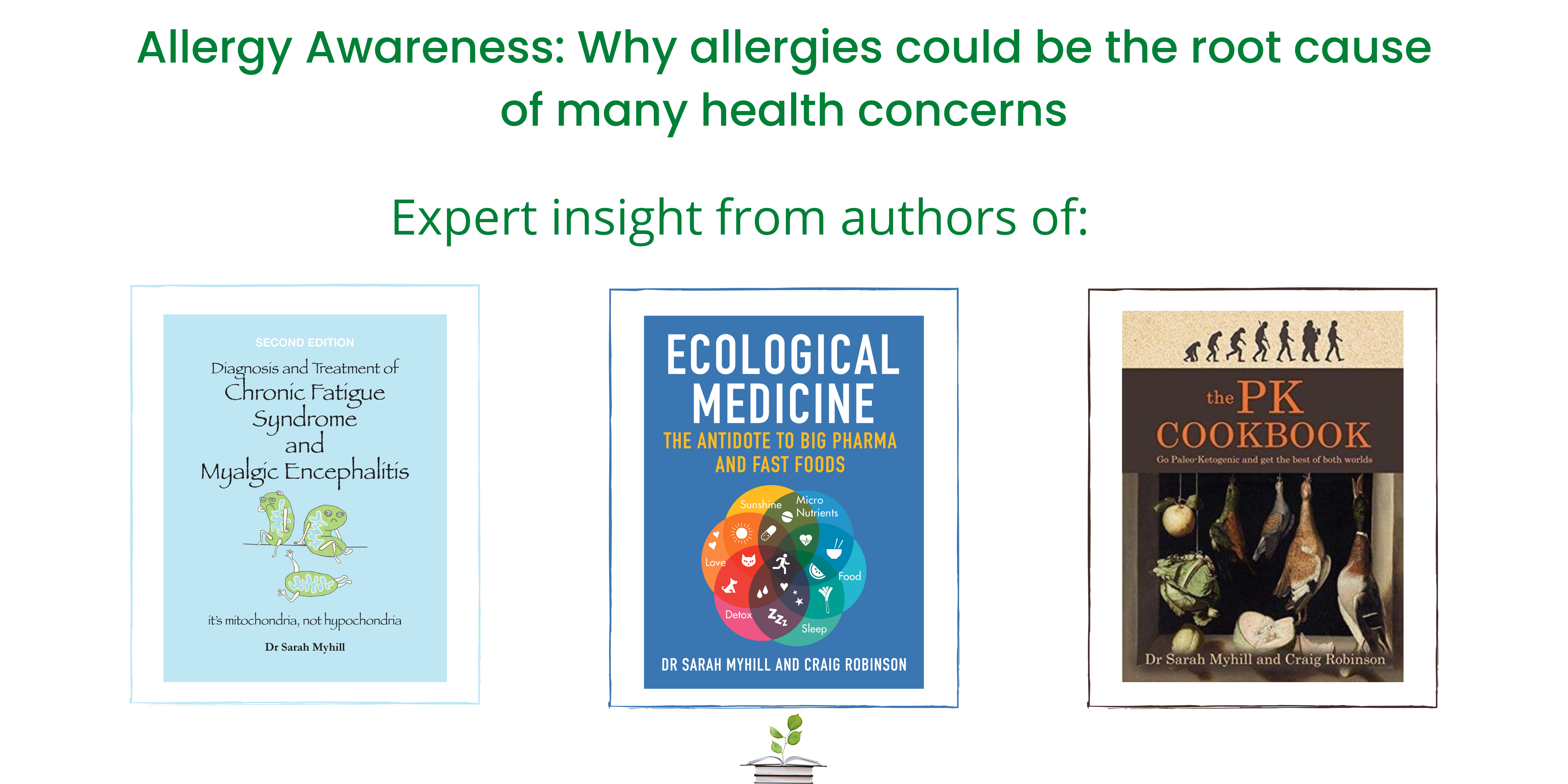 Blog written by Sarah Myhill, author of Diagnosis and Treatment of Chronic Fatigue Syndrome, Ecological Medicine, and The PK Cookbook

Allergy is the inflammation which results from response to substances (called antigens) from outside the body. Some of these present no threat to the body. Examples include pollen, house dust mites, animal dander and foods. Some antigens do pose a threat in high doses, such as metals (lead, mercury, arsenic, nickel), toxic chemicals (pesticides, solvents) or electromagnetic radiation (wi-fi, mobile phones, cordless phones etc).

Allergy has been known about for centuries. For example, 5-10 per cent of people with asthma are also allergic to sulphites. Pliny the Elder wrote of this when he reported the case of an asthmatic patient (rare for his times) who died from a bronchospasm in 79 AD after the eruption of Mount Vesuvius. The patient had lived a ‘normal life’ but for this ‘one incident’.

Allergy is the great mimic and can produce almost any symptom. Furthermore, one can be allergic to anything under the sun, including the sun! Allergy is also common – at least 30 per cent of the population are allergic to some foods. However, by the time allergy has produced fatigue (the major focus of my work as a doctor) it has usually caused other problems beforehand. Suspect an allergy problem if any, or a combination, of the following are present:

* The onset of fatigue is pre-dated by, and/or there is a long history of:

How to identify your personal food allergies

I never do tests for food allergy because they are unreliable. False negatives are common – so, for example, many people who are intolerant of gluten will test negative for coeliac disease. Often, when the test is negative, they are told by their doctor that it is safe to eat that food – not so! There are many tests for food allergy on the market, but again I find positive results can be misleading, not least because the patient believes absolutely in the accuracy of tests and ends up avoiding foods unnecessarily or eating foods which are causing them symptoms.

The only reliable way to diagnose food allergy is by an elimination diet. The key is to cut out those foods that one is consuming daily. The reason that reactions may be prolonged or delayed is that daily consumption masks the link between exposure and symptom. Western diets include daily consumption of grains, dairy products and often yeast. If in addition one is eating other foods, such as potato, soya or tomato, or drinking regular tea, coffee or whatever on a daily basis then this too should be excluded. One should stay on this diet for at least one month before reintroducing foods to the diet – this should be done cautiously since reactions can be severe. Dr John Mansfield developed a practical, easy-to-follow elimination diet that is described in his last book, Six Secrets of Successful Weight Loss.

The Stone-Age or Paleo diet is a ‘best guess’ diet and a useful starting place, hence my recommendation of the PK (Paleo-Ketogenic) diet as explained in our book Paleo-Ketogenic: the Why and the How. If it transpires that there are multiple allergies, then these days I do not put people on a more restricted diet – that is because some people get completely stuck on two or three foods and are unable to bring in new foods because of the above severe reactions. Instead, I put in place the interventions I recommend for a general approach to inflammation together with specific desensitisation techniques to switch off allergy (see our book Ecological Medicine).

Increasingly I am finding that one does not have to be perfect to reduce allergy and allergy symptoms. Simply reducing the total load is helpful – attention to the general approach is as important as specific desensitisation. However, the key steps are: